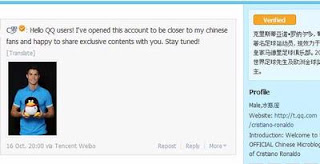 Indeed, the microblogging site Twitter is the biggest in the world. However, the Chinese government prohibits people using Twitter so competition there Weibo leaving only two sites, namely Sina and Tencent.In 2011, Tencent reported the number of users of their services increased sharply. Presently, Tencent has 233 million registered users, up 33 million users since last June.

Competitor Tencent, Sina, who last week has just launched an interactive online video service also has more than 200 million users. Despite having the same number of users, in culture, Sina is more a choice for Internet users in China.

Although Sina is more acceptable to the people of China, Tencent has a specific strategy to compete with competitors that. To reach new users, Tencent known to frequently use the services of a celebrity or public figure as an attraction.Is Ronaldo also paid by Tencent? There has been no official of the party penjelasaran Ronaldo or Tencent about this. However, according to Steven Millward at Penn Olson, Real Madrid star is indeed to be the official ambassador of Tencent. This is reinforced with a profile picture Tencent Ronaldo on account of his looks was holding a stuffed penguin is the mascot of Tencent.

Ronaldo is not the first footballer to use the microblog site in China. Barcelona and Argentina star Lionel Messi had already been using Tencent, and now he has had more than 13,000 followers.