Nokia has launched Two New Smartphones Based on Microsoft's -->

Nokia has launched Two New Smartphones Based on Microsoft's 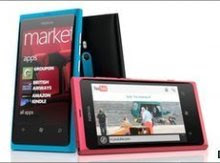 Finnish mobile phone maker Nokia has launched two new smartphones based on Microsoft's new Windows Phone 7.5 operating system.
The Lumia 800 and the Lumia 710 mark the beginning of Nokia's fightback against Apple's iPhone and rivals using Google's Android software.
Nokia's new boss, Stephen Elop, had previously warned that the company was stuck on a "burning platform".
Today he said the launch marked the "rebirth" of Nokia.
In an unusual move for the company, it will start shipping the Lumia 800 range almost immediately and hit the shops in France, Germany, Italy, UK, Spain and the Netherlands in November.
The firm also announced four new basic phones.
The brightly coloured handsets are pitched at developing countries.
Mr Elop said the phones would blur the boundaries between feature phones and smart phones, bringing the internet "to the next billion people".
The new range will be called Asha, a name that clearly identifies Nokia's target market: the name is derived from the Hindi word for "hope".
Although the phones will be relatively cheap, they will sport features like touch screens, 5 mega pixel cameras, bright screens, 32GB storage for music and long battery life.
Smartphone fightback
However, profit margins in the market for basic phones are razor thin, and so Nokia's main focus will be on its new smartphones.
Until recently, the company was the world's largest maker of smartphones.
However, its market share has been falling rapidly, and in one of his first moves after taking over at Nokia a year ago, Mr Elop ditched Nokia's two operating systems for phones - the venerable Symbian and the Linux-based MeeGo - and struck a broad alliance with Microsoft.
Now Microsoft's new Windows Phone 7.5 operating system, also dubbed Mango, will power all Nokia's smartphones.
Mr Elop acknowledged that the Lumia 800 was a design development of a previous Nokia phone, the MeeGo-based N9.
Mr Elop said the "Lumia is the first real Windows phone" and predicted the company would be the leader in "smartphone design and craftsmanship".
The Lumia 710, which comes in a range of funky colours, will be pitched as the "affordable" Windows phone.
The phone's product manager, Kevin Shiels, said the new phones would have integrated cameras with high-end Carl Zeiss lenses.
In an explicit dig at Apple's iPhones, he demonstrated how Windows Phone shows information and updates directly on the first screen, without having to tap into applications.
Speaking at the Nokia World congress, Mr Elop said Nokia had "some tough decisions to make, but [we] have started to deliver some early results".
Nokia had been seen as "reliable, trustworthy", like a mother that will "comb your hair... but that's not good enough," he said.
"We expect people to see something special when they hear Nokia," said Mr Elop. 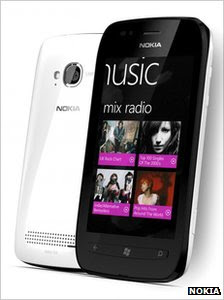 The Lumia 710 is a cheaper alternative to the 800 model
Nokia services
To distinguish itself from other makers of Windows phones like HTC, Samsung and LG, Nokia is betting on a range of services.
Key among them is the integration of location-based services like Nokia Maps, real-time navigation software Nokia Drive, a live-streaming music service Mix Radio and Liveview, an augmented reality service.
Nokia's navigation service Drive will be free. It will not run in an app but will use HTML 5 technology, and will be updated with traffic information in real-time.
Nokia will also deliver its phones with the ESPN sports hub, which will provide free access to text and video news from ESPN.
The biggest innovation, though, could be Nokia Pulse, a service that combines elements of social networking with location services. It allows users to share with friends and family experiences - from pictures to whereabouts to activities, integrated with Nokia's mapping service
Cold water
Shortly before Mr Elop announced the switch to Microsoft Windows Phone, he sent an email to his staff, in which he compared the company to a man on a burning platform, who had the choice of burning to death or jumping into the icy waters below.
The launch of the new phones is Nokia's splash landing. Mr Elop will hope that the new hardware and software offering will be popular enough with consumers to allow the company to swim.
But it is not just Nokia that has a lot riding on the launch of these phones.
Software giant Microsoft has been struggling for years to break into the mobile phone market. Its most recent offering, the Windows Phone 7 software, has been well received but gained little traction in the market.
The company will hope that Nokia's close relationship with mobile phone network operators around the world will give it the access to consumers that has been lacking so far.
#Teknologi
Bagikan
Komentar