Online shopping is nothing new, especially in plugged-in South Korea. But one company says it's going further. It's testing out a virtual supermarket in a public place.

At Seolleung underground station in Seoul, there's a row of brightly lit billboards along the platform, with hundreds of pictures of food and drink - everything from fruit and milk to instant noodles and pet food.

Standing on the platform, a man in his 60s who gives his name as Mr Bae, says it looks to him like an advertisement for a convenience store.

When I explain it's a virtual supermarket that you access with your smartphone, he doesn't seem impressed. He says he doesn't have a smartphone, so it's not for him. But he says, it's a good idea for younger Koreans.

And that's who this virtual supermarket is primarily designed for, according to Homeplus, the South Korean affiliate of the British supermarket chain Tesco.

No time to shop

Earlier this year, the Wall Street Journal reported that the number of smartphone subscribers in South Korea had passed 10 million, up from just a few hundred thousand in 2009.

That might be why Homeplus's project co-ordinator, Jo Hyun Jae, is sounding so confident.

He says young Koreans increasingly rely on smartphones to take care of many of their daily tasks.

"Our customers are really busy and many don't have the time to go to the supermarket to do their shopping," he says. "So our virtual store allows them to save time."

Kim Yoona, 25, volunteers to give the virtual supermarket a try.

After downloading the Homeplus app to her smartphone, Kim stands on the platform, checking out what's on offer.

She has more than 500 of the company's most popular grocery products to choose from. Several "shelves" at the virtual store

"I'm thinking of buying the Maxin Mocha Gold Might, an instant coffee mix," she says. "They have one, two, three, four, five, six kinds of coffee mix lines. Because Maxin is my favourite, I will buy this."

Kim holds her phone over the black-and-white QR - the Quick Response code - just under the picture of the coffee.

There's a beep, and the picture of the coffee appears on her phone screen.

She selects what bag size she wants, then the app asks her to enter when and where she'd like the product delivered.

If orders are placed before 13:00, the company pledges to deliver the groceries the same evening.

Homeplus's Jo Hyun Jae said there are plans to put virtual stores in other underground railway stations, especially those close to the city's universities.

And the company wants to introduce them in other countries too, he says.

"We think this concept can work outside of Korea, since many young people around the world are adopting smartphone technology." 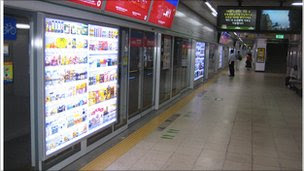 A display of virtual groceries on the platform

But Kwon Ki-Duk, at the Samsung Economic Research Institute in Seoul, says there are aspects of local consumer culture that make technology like the virtual grocery more likely to take off in South Korea than elsewhere.

She points out that Koreans are very quick to adapt to new technology products.

"Koreans are really interested in converging and cramming many different functions into a single gadget, and mixing technologies, in order to find novel ways to complete ordinary tasks," she says.

But, says Kwon, South Koreans are not ready to abandon today's supermarkets - not yet at least.

The country is famous for its long working hours and tough work culture. Going shopping, she says, is a way for people to relax when they are not working.

She includes herself in that group.

After trying out the virtual store, Kim Yoona agrees that for her, it does not yet replace a physical supermarket.

That is because she likes to see and touch items before she buys them.

"When I go to the real store, I can check the quality of the vegetables or fruits," she says.

There doesn't seem to be a smartphone app that can do that.